Webinars are only $70 for our VBMA Members, and you have the option of attending live or viewing a recording.

Recordings of all our past programs are available for purchase HERE.

Coming October 2020, in conjunction with the ACVBM Annual Conference at the Graduate Hotel in beautiful downtown Eugene, Oregon. Join us on October 25th for the Mushroom Festival, followed by two days of lectures, and finally our 2020 EcoTour at Belknap Hot Springs 10/28 - 10/30.

The board of the Veterinary Botanical Medicine Association is comprised of our current President, our Liason, our Past President, our International Advisor and our Recording Secretary.  All board positions are on a volunteer basis.  We're grateful to have such amazing people donating their time to serve the needs of our group!

During the NAVA (National Acupuncture Veterinary Association) clinical studies in acupuncture and paralyzed animals (1974-75), one of my teachers Dr. San Shin commented, “If you think acupuncture is powerful, herbal medicine is 10X more powerful!”

I was lucky to have met Dr. Sydney Golinsky who just retired from teaching pharmacognacy at the University of Berkely School and Pharmacy.  In my neighborhood, he started an unusual pharmacy he called the “Apopthecary”.  Inside, on the left were all herbal, vitamin and mineral supplements, and on the right were all of the standard drugs people buy OTC.  I thought that was interesting.  As people walked in with prescriptions for drugs from their physicians, he would try to “talk them into” taking an herbal supplement instead. (Now this was probably not “kosher” but it got me interested since pharmacology, botany, and biochemistry were my interests during my undergraduate education.

Since I was just starting my house call practice in the San Francisco Bay area, I had plenty of time to spend with Dr. Golinsky and watched him mix formulas from scratch, some of which I began using on horses.  At the time, I was doing small animals, and doing acupuncture at the race tracks around the Bay Area.  Bringing a bag of leaves and twigs, and telling the horse trainer that they would improve performance was received with open arms……surprisingly.  I remember trainer D. Wayne Lucas’s horses at Bay Meadows as the first race horses in my area receiving herbs to improve health and performance.

Besides studying with Dr. Golinsky, I was lucky enough to live near San Francisco and receive my education in Chinese herb formulas from Dr. Stephen Chang of the Tao Foundation, and in Santa Cruz from Subhuti Dharmananda at the Institute of Traditional Medicine.  Being one of the speakers for IVAS (International Veterinary Acupuncture Society), I was the first to speak on the use of Yunnan Paiyao, and Ginseng in 1978-79.  I continued my studies in herbal medicine in California when ever there was a human workshop, the most notable by the American College of Chinese Medicine which lead me to the Sun Ten formulas which I still use today.

Because my father was a mushroom hunter, I was always fascinated by them because he would emphasize….”mushrooms can either heal you, or kill you”.  Living in the forests of the Santa Cruz Mountains afforded me the opportunity to easily find edible mushrooms such as oyster mushrooms, bluets, chanterelles, and boletes.  With the help of David Aurora’s book and a few classes, I was able to distinguish the difference between edible and non-edible varieties. A workshop in San Francisco with Christopher Hobbs opened some new doors to the use of mushrooms as “medicinal” and inspired me to study and research the information “on how and why” medicinal mushrooms were so powerful, especially Ganoderma spp, Shiitake, Cordyceps, and Turkey Tail.

My interests currently lay in the continued study of medicinal mushrooms, plants that mollify the effects of radiation, and invasive plant species which have medicinal qualities and how the ecology supports their proliferation. 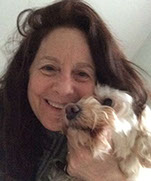 Dr. Jamie Moran received her veterinary degree from Cornell University. She specializes in holistic medicine, especially traditional Chinese Veterinary Medicine and is certified in acupuncture and has completed course work in food therapy and herbal therapy. Her outside interests include gardening, playing the violin, swimming, sewing and knitting. She shares her home with her husband, children, dogs, cats and one fish.

We're thrilled that Dr. Moran has agreed to serve in this newly-created board position, one which we anticipate will help us to grow, as well as maintain excellent working relationships with other groups with focuses similar to ours. 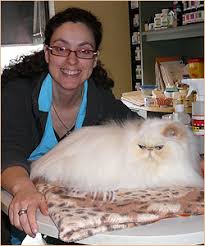 I always knew that I wanted to be a veterinarian from the time that I was little, fostering orphaned wild rabbits and having a variety of pets in my house. I grew up with the tradition of European herbalism, with various teas and infusions regularly used by my mother to support our family's health. My mother's knowledge was passed down to her and then to me, by my grandmother, who was a pharmacist in the days that herbs and plant materials were the majority of the medicines used. My interest in all things Asian began in my early teens when I became a vegetarian, with cooking experiments that the rest of my family didn't always appreciate! I received a Doctor of Veterinary Medicine degree with honours from the Ontario Veterinary College in 1991. I started my professional  life practicing the conventional "western" veterinary medicine I had been

trained in, but embraced more holistic health care for myself and my family, including nutrition, Tai Chi exercise and Qi Gong meditation.  After ten years in practice the frustration of seeing so many chronic diseases in my patients led me to begin to integrate what I had been practicing in my own life into that of my patient care. I began studying Traditional Chinese Veterinary Medicine (TCVM) at the Chi Institute with Dr. Shen Xie and became a Certified Veterinary Acupuncturist in 2005; I have continued my education with advanced training in Veterinary Tui-Na bodywork and Veterinary Herbal Medicine. I found the VBMA early in my exploration of herbal medicine and have been a member since 2004. I have used my background in research to critically evaluate the evidence base for herbal medicine, and tend to get a bit nerdy about the bioichemistry of the plants we

use medicinally. I offer integrative health care to my patients, combining cutting edge therapies such as Regenerative (Stem) Cell therapy and Platelet-Rich Plasma injections with herbal medicine, acupuncture, nutrition (whole foods and neutraceuticals), and body work. I now lecture to both veterinarians and lay groups, and frequently mentor veterinarians interning in veterinary acupuncture. Besides the VBMA, I am active in the Association of Veterinary Acupuncturists of Canada, the American Holistic Veterinary Medical Association, and the International Veterinary Acupuncture Society. When I need a break I walk on uneven ground in close contact with the plant world, especially in interesting mountainous places. I am looking forward to working with the other board members and hope that I can contribute something back to an organization that I feel I have gained tremendously from.

Barbara actively participates in industry related associations and committees. She was honored to have held the position of President for the Australian Veterinary Acupuncture Association (2003 - 2007), and the International Veterinary Botanical Medicine Association (2003 - 2006). She has also held the position of Policy Council Member for the Australian Veterinary Association when she was an advisor for Holistic, Complementary and Alternative Medicine (1996-2003).

In addition to being the VBMA international board representative, Barbara is the current president  of IVAS, and a member of Australian College of Nutrition and Environmental Nutrition, National Herbalist Association Of Australia (NHAA), and Australian Veterinary Association Chartered (CMAVA).

Barbara has been the inaugural recipient of the AVA Community Service Award for her role in rehoming thousands of dogs and cats through the programs and websites she developed in Australia.

Barbara enjoys sharing her passion for holistic care within the international veterinary community. She has lectured in Australia, New Zealand, USA, Japan, Canada, India and Sri Lanka and is involved in teaching veterinary Western and Chinese herbal medicine, complementary medicine and holistic nutrition. Her current involvement in CIVT is amazing. She is one of the leaders in both the Chinese Herbal course and the Western Course. This programs are truly wonderful and make learning Herbal medicine easily available to all.

Barbara is the author of two books, Healthy Dogs, A Handbook of Natural Therapies (2003) and Natural Healing for Cats and Dogs (2005), she has also co-authored Veterinary Herbal Medicine with Dr S Wynn (2006) and was an contributing author of Integrating Complementary Medicine into Veterinary Practice (2008).

She has also featured on Television programs such as Harry's Practice, Totally Wild and Creature Features, as well as in Magazines such as New Idea, The Australian Woman's Weekly, and has been published in various Newspaper articles.

Barbara shares her life with her partner Karl and their Burmese Tallulah and Sweet Pea, a lively worm farm, and more than 50 orchids. We are so very glad she is a member of the VBMA!!! 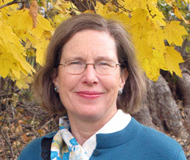 Beth Lambert is the VBMA's secretary, all around great person and advisor to any herbal product or production question that comes up.  A Harvard Business School graduate, CEO Beth Lambert had a very successful Wall Street Career which she left to pursue her interest in environmentally based businesses.  She was soon running a Permaculture publishing company, a community supported farm, and teaching at Rutgers.  One of her farming partners, who was taking David Winston’s two year herbal studies program, introduced her to David, who was looking for some advice on his herbal products company.  And after reviewing the business, she joined the company as his business partner.  In addition to being on the Board of the Veterinary Botanical Medicine Association, she is on the Board of American Herbal Products Association and acts as Chair of its Education Committee, which develops both industry education and educational programs for practitioners.  She is Vice Chair of AHPA-ERB Foundation, an organization working with University of Massachusetts and partially funded by the federal government to revise the Botanical Safety Handbook.  And she is on the Board of Genesis Farm, a 140 acre farm dedicated to Earth literacy, Permaculture and Transition culture.  In addition to being just a great person, Beth is a great resource and asset for the VBMA .